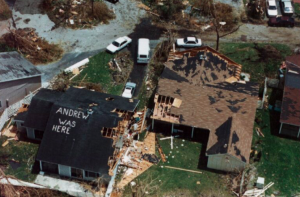 Thirty years ago, the Category 5 storm, Hurricane Andrew, caused damage on a previously uncontemplated scale. The storm rendered 11 US insurers insolvent and resulted in a fundamental change in how catastrophic risk was insured. Rates for insurance premiums tripled as insurers scrambled to recover from the event as well as prepare for catastrophes in the future. Dr. Robert Hartwig, said that in the run-up to Andrew insurers had been eager to take the premium from a growing population in Florida while underestimating their accumulating risk exposure.

“It was a ticking time bomb and in August 1992, it exploded,” Dr Hartwig said. “About 18 months later, the industry was shaken out again by the Northridge earthquake in California. It became clear that they lacked the ability to model large-scale catastrophic risks — and until that was possible, investors were reluctant to commit capital.” He also added, “The Bermuda model has been so successful, it’s been replicated. It’s quite amazing, the relative stability that we’ve seen in global property insurance and reinsurance markets, despite the threat of climate change. When you look at the expectation for future natural disaster losses around the world, then the advances in modelling that began with Andrew will be more essential than ever.”